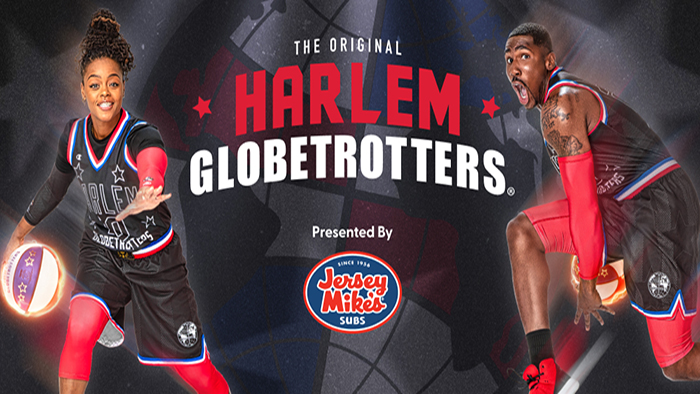 The Harlem Globetrotters 2023 World Tour presented by Jersey Mike’s Subs is coming with game like never before! Your favorite Globetrotter stars are bringing out their amazing basketball skill, outrageous athleticism and a non-stop LOL good time. Join the Globetrotters as they go head-to-head against the Washington Generals who will stop at nothing to try and defeat the world’s winningest team!  In 2023, every fan is getting in on this action…that means YOU, so get ready! It’s GLOBETROTTER game time!

It’s EVERYONE’S GAME in this Globetrotter first-ever tour that interacts with EVERY FAN in the audience. Be sure to bring your top game as some lucky fans will even get to be on the court!

From trick shots to long shots to how-did-they-do-that shots, get ready for the Harlem Globetrotters to put up…basketball shots! Stay on the lookout as the Globetrotters are taking even more incredible shots from around the arena - because shooters shoot! Our stars will be on fire with the Globetrotters original 4-points shot®. And, the action doesn’t stop. Jaw-dropping ball handling, fastest-dribbling, crazy crossovers and amazing basketball skills promise non-stop action and four quarters of unimaginable fun!

THE WASHINGTON GENERALS ARE BRINGING THE HEAT!

The Washington Generals are up to something trying for their first win since 1971. With an all-new set of antics and new tricks up their sleeves, can they beat the world’s winningest team in their desperate attempt to outscore the Harlem Globetrotters?  The Washington Generals have been training hard and will stop at nothing to WIN in this high-stakes battle of basketball! Never give up!